On February 12, 2000, I visited in Tokyo the Watanabe Print Shop to browse for woodblock prints, when unexpectedly I got the chance of being introduced to Shoichiro Watanabe, the grandson of Shozaburo Watanabe, who was original founder of the S. Watanabe Color Print Co. The young Mr. Watanabe, born 1958, speaks English well and is now the present day President of Watanabe Han. I used the opportunity to ask some questions, all of which were answered very kindly, with interest and patience. Mr. Watanabe took care to emphasize that his own experience in the woodblock print world is somewhat limited compared to that of both his father and grandfather, because he was born in only 1958, one year after the death of KAWASW Hasui. As we talked for approximately one hour, I made some notes--after which I put together the following as a "Q and A format" interview.


The author (left), seen together with Mr. Shoichiro Watanabe (and his business card).

Q:      It is usually said, that Hasui prints published by Watanabe after the War bear the round "6mm" Watanabe seal and that this changed to the "7mm" Watanabe seal following the death of Hasui in 1957. On prints of other artists, e.g., Tsuchiya Koitsu and Shiro Kasamatsu, whose works were published also by Watanabe, we find the same phenomenon, early prints after the war show the smaller "6mm" seal, while again the later ones got the "7mm" seal. In which year approximately did Watanabe change the seal size for Hasui prints and the other prints?

A:      Frankly speaking, we don't know, nor are we even aware of the exact size or diameter of our Watanabe seals. We know that collectors, particularly those of overseas, are very accurate when it comes to shape and size of our seals, however sometimes we feel a bit amused about that. With regards to the shape of the seals, except those "oblong seals" used in the early Showa period, we have actually had the round seal since approximately 1915, sometimes with an extra outer circle, sometimes without. The first round seal used in the Taisho period was a little larger in diameter (1). It was used for the prints of the first "shin hanga" artist of my grandfather, Fritz Capelari. The next artist was Charles Bartlett and then Hashiguchi Goyo came, only little later followed by Ito Shinsui. Of course, we also printed this round seal onto the facsimile "ukiyo-e" prints, which at that time still were our primary business.

But coming back to the time after the War, we had several seals in use, sometimes they got broken, and sometimes they showed signs of wear and had to be replaced. We ordered the seal from a carver and did not pay much attention to shape and design. So it came, we also have to accept that making such seals is a craft, that size and design changed from time to time. Sometimes different seals were used at the same time. If collectors use different sizes and shapes of our seals to determine the date of post-War Hasui prints, we can say, the change of seals has nothing to do with the death of Hasui. Instead, just by chance, gradually we had the transition of one seal type to another. Hence, to make it clear again, the size of seals is no clear indicator for the year of print, not for Hasui, not for Koitsu and Kasamatsu. All we can say is that early post-War prints more often show the small seal and recent prints the larger one, but for many years between, both seal types were used at the same time. For recent prints (after 1989), we apply a red, rectangular Watanabe seal (the so-called "Heisei" seal) onto our prints, sometimes together with the round seal, sometimes without.

At this point of our discussion, an elderly female Japanese joined into our discussion, who I suppose due to age and gesture was the mother of Mr. Watanabe and wife of the late Tadasu Watanabe (which was later confirmed). She briefly explained in Japanese: "No, as far as I remember, we never cared about the size of our seals."

Q:      When we compare different editions of one print, we find out that the location of the seal in the printed area or on the margin changes, sometimes the seal is in the left corner, sometimes in the right. What can we learn from that?

A:      Nothing, the location does not tell us anything about the edition or the time of print. Sometimes, my grandfather received in the morning 100 prints of one design, and he stamped the seal, let me say, into the right lower corner. In the afternoon, when he received further 100 copies of the same design, he stamped the seal, sometimes even using a different seal, onto a different location of the printed area. Putting the Watanabe seal onto a print, however, was always the right of the publisher after checking the quality of a print, our printers never had the right to do so.

To illustrate the different seal location within a print, see the original sketch below by Mr. Watanabe: 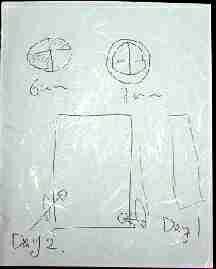 Q:      Watanabe Han along with Doi Han and some other publishers are the main publishers for Hasui's works. Recently however, I've found later prints of Hasui published through Oedomokuhansha and others published by Shobisha. Can you tell me something about these publishers?

A:      The first one, Oedomokuhansha, I don' t know. In the case of Shobisha, it is a long story. Originally there was the publisher named Sakai & Kawaguchi, who had acquired the printing rights of around 15 prints from Hasui. Around 1932, Sakai & Kawaguchi separated and Kawaguchi alone continued this business under the name Shobido (2). Unfortunately, a fire caused by an accident later destroyed all of the original blocks, which were still kept from the Sakai & Kawaguchi collaboration. However, these blocks were recarved and the business of Shobido continued for a while. Later, I do not know whether Shobido was not so successful or just left this business, the rights and the blocks were transferred to a company named quite similar, Shobisha (3). This print publisher, located in Tokyo's Kanda District is still active and sells, among others, Hasui prints (4), which in principle are based on the Hasui designs of Sakai and Kawaguchi. They bear the Hasui signature and seal, but no publisher seal, some blocks probably were recut again and a few details got changed or even added. Their printing quality remains excellent. 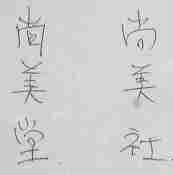 Q:      How is Watanabe Han itself dealing this issue of original and recut blocks?

A:      Our company takes this matter very seriously and with responsibility. Our prints of Hasui and other artists are printed completely with original blocks, from the "key-block" to all of the color blocks. That is the reason the number of prints available changes in our catalogues and listings, sometimes up, sometimes down. For this reason, when a given set of blocks gets worn out, we do not recarve them, rather, we just terminate printing of these particular prints. When you compare our old catalogues, let me say from 1935, 1957 and 1962 (Mr. Watanabe had all these beautiful catalogues at hand) with recent listings (e.g., the 1999 Catalogue) you recognize that the number of prints available of Hasui and Kasamatsu has gotten substantially smaller. This happens, because blocks get broken and we do not recut them as I explained.

On the other hand, occasionally we are proud to add a "new print." We keep all of our hundreds of blocks in Tokyo in four different locations, which doesn't make it easy to control the inventory--for this reason, sometimes therefore we find a key-block here and a color block there. Luckily, we have recently succeeded to match-up some of these block-sets, and for this reason, our 1999 Catalogue contains two additional prints of Hasui compared to the 1996 listing (H-41, H-42) (5).

Q:      Major collections of "ukiyo-e" and "shin hanga" are overseas and not in Japan. What is your impression about the recent trends of collecting "shin hanga" prints?

A:      To our pleasure, we now see that the interest in "shin hanga" is rising outside Japan as well as in Japan, but still the most buyers are from the US. I feel, after the War, during the "occupation time" many American people came to Japan, stayed here and found interest in contemporary or traditional Japanese prints. Such people also had sufficient funds to create collections, which they later took home. Therefore, still today, compared with Europe the USA remains the major market for "shin hanga." Nevertheless, last year, I attended two auctions in Europe, one in Munich and one Barcelona, where we offered prints. At the beginning, bidding was reluctant, but then the bids went up, because we offered only prints of excellent quality. I am personally satisfied, that "shin hanga" finds nowadays a worldwide appreciation because it confirms the wise decision of my grandfather to initiate this business decades ago. On the other hand, we are not able to convert this rising interest into a permanent profit, because the supply of such prints is very limited. Although we keep from each Hasui print at least one copy, and sometimes two or three, we do not intend to bring them into the art market.

We also notice growing interest for "shin hanga" among Japanese museums and Japanese collectors. When we look back in history, it was the western collector who bought after the opening of our country in the Meiji period huge amounts of "ukiyo-e," which at that time were not appreciated so much as art in Japan. Then, in the early 20th century again the foreigners, and not the Japanese, bought "shin hanga" and "sosaku hanga." In meantime, the style of prints had changed, Japanese printmaking was combined with the western way of seeing and perspective, and probably this fact appeals the foreigners. Now again, after the foreign wave in "shin hanga" collecting, Japan is a follower again.

Q:      For collectors, literature available about "shin hanga" is somewhat limited, sometimes expensive and in principle, difficult to obtain. Last year, I obtained a copy of "Narazaki" (the comprehensive Japanese Hasui reference) on behalf of a fellow collector for 200,000 yen; while other books are completely out of print. What do think about this situation?

A:      Yes, we are aware of this. Some artists are heavily sought after, others not, the same applies for the literature of them. If you got the "Narazaki" book for 200,000 yen, you should be happy. I bought one also last year in the Netherlands for a collector at a much higher price (actual sum known), and certainly this important work will become even more expensive in the future.

But this doesn't apply for all books. Five years ago, the Yamanashi Museum published in cooperation with Watanabe a beautiful book about all woodblock prints of Ito Shinsui. The edition was 900 books, but it doesn't sell well, we still keep about 90 unsold copies in stock (6). But, I am sure, when they are sold out the price goes up.

Q:      Mr. Watanabe, I thank you very much indeed for your precious time you shared with me, for the valuable information about "shin hanga" in general, Kawase Hasui and of course Watanabe Han. Furthermore I thank you for the photocopies you've kindly made for me from your 1935 and 1962 Catalogues.

(1) This early seal, slightly "oval" in its shape, is quite a bit larger at 9mm in diameter.

(2) According to Merritt & Yamada (p. 219/220), Shobido is the early name of Watanabe, which certainly now seems very questionable.

(4) Around 15 different designs of such Hasui prints can be found at various art galleries and souvenir shops in Tokyo.

(5) These two additional Hasui prints are "Night at Homonji, Ikegami" (H-41), and "Morning at Okayama Castle" (H-42). (Meanwhile, as of January 2003, twelve further designs have been reprinted.)


Gallery   Terms   Ordering   About Us   We Buy Prints   Library