Much less is known about Unsodo prints published before WW II, as our knowledge about the seals of Unsodo on woodblock

The Publisher's Seals of Unsodo: 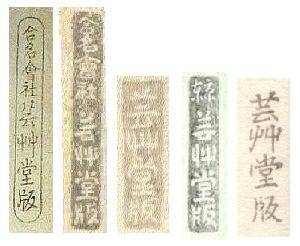 The left seal is in "traditionell style," which reads top to bottom as "Yugen Gaisha Unsodo Han," and translates as "Limited Company Unsodo Publisher." This seal is from a 1947 print by Kenji Kawai.

The next seal has the same content, with only the style of carving being different. The third seal, reading simply "Unsodo Han" is the most common one. We find it on virtually all prints by Shiro Kasamatsu and Takeji Asano (provided, published by Unsodo). It is in use since approximately 1950 and is still applied on prints published by Unsodo today.

The forth seal shows only a small difference in the tiny two characters on top: "Tokyo Unsodo Han." The seal apparently was used for certain prints published by the Tokyo Branch of Unsodo.

The fifth publishers seal is new and is quite similiar to the traditional third seal (it also reads simply "Unsodo Han") , however its shape is slightly different and it is done black characters set against a white (unprinted) background. It first appeared in 1999 on subsequent reprintings of Kasamatsu's "Nikko Kegon Falls" print.

For the vast volume of prints by Shiro Kasamatsu and Takeji Asano surprisingly only two carvers and a single printer were responsible. The carvers were Nagashima Michio (left and fourth seals, both of which read: "hori (ie, carver) Nagashima") and Okura Hanbei (second seal: "hori (ie, carver) Okura").

The single printer of nearly all Unsodo prints is Shinmi Saburo, sometimes also (incorrectly) read as "Niimi Saburo." His seal is the third one and reads "suri (ie, printer) Shinmi." Shinmi-san is now currently in his 90's and therefore stopped printing many years ago. NOTE: Despite the fact that Shinmi has not printed for a number of years, many of the most recent reprints still (incorrectly) show his seal as printer. For this reason, it is vitally important that the collector either know how to accurately "judge" a print's age by its paper--or trust completely in the knowledge and integrity of its seller.

Finally, only on a very new restrike, "Nikko Kegon Falls" by Kasamatsu, do we find since 1999 the seal of Unsodo's new printer "Toda" which is shown on the far right as the fifth seal (it is slightly smaller)--and note, this time the word "suri" (ie, printer) appears WITHIN the black box, rather than above.

Gallery   Terms   Ordering   About Us   We Buy Prints   Library