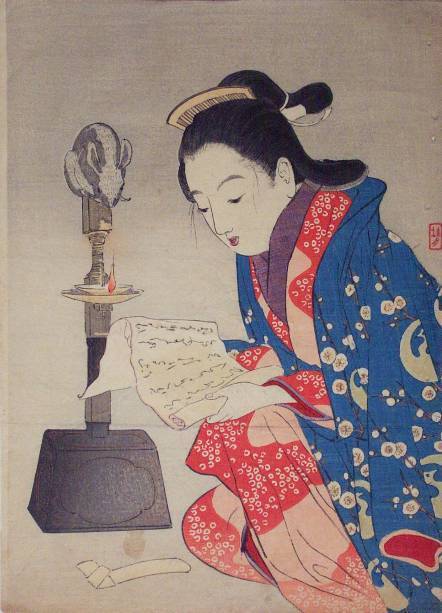 The Japanese word "kuchi-e" translates literally as "mouth-picture" and, in a descriptive manner typical of many Japanese terms, refers to the multi-color woodblock prints that were inserted into the fronts (that is, the "mouth") of literary magazines and novels during the later years of Japan's Meiji era. (These inserted illustrations were also at times referred to as "sashi-e.") Due largely to the time during which they were produced, many of these story illustrations where produced to the highest of standards, with many exhibiting advanced printing techniques typical of "surimono" (privately commissioned woodblocks) such as the use of "gauffrage," extensive "bokashi" shading, "burnishing," the use of metallic pigments, and highly detailed carving.

Although a few books' "kuchi-e" were of a smaller size that did not require folding, typically these woodblock illustrations were produced as over-sized prints that were inserted into the fronts of these books as "fold-outs." As these novels and literary magazines were typically printed and bound in a tall/narrow format, to fit, their single "kuchi-e" illustrations required two folds in order to fit within the closed book.

To better understand more about how "kuchi-e" came into existence, a little background in order. 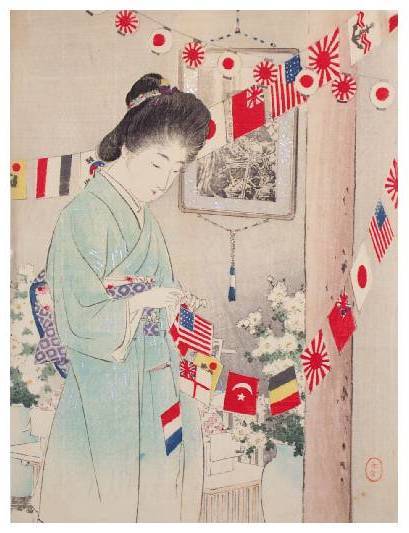 Historical Background -- The Evolution of "Kuchi-e"

To understand the appearance and evolution of "kuchi-e," one must first have some understanding of the social and political turmoil that occurred in Japan during the last half of the 19th century. Preceding the forceful opening of Japan's borders by Commodore Matthew Perry when he sailed into Edo Bay in 1853 abruptly ended Japan's two centuries of seclusion, Japan had existed largely isolated on its own as a "isolated society." During this earlier period, which lasted nearly 200 years, the Japanese society existed largely away from the influence of other nations and, as a result was largely unaware of the scientific and economic progress that occurred during this time.

To be sure, the Japanese did have some limited contact with the European world during this earlier Edo period (1604-1868), however this contact was strictly limited to the Netherlands, a country which was allowed to maintain only a small trading post on an island in Nagasaki, far from the capital of Edo. Through this contact with the Dutch, the Japanese did learn some about astronomy, a limited knowledge of western medicine, and certain physical sciences, however they badly lagged during this period with respect to many scientific and technical advances.

Perry's 1853 arrival in the capital of Edo with steam ships and powerful cannons changed all that, and the rest is history. The subsequent opening of Japan's borders to international trade in 1859 and the following Meiji Restoration and reorganization of government in 1868 lead to a very rapid and forceful change. Within a single generation, Japan began to adopt and imitate many aspects of western culture, including western modes of fashionable dress and dance, western social customs, western architecture, transportation, international trade, etc.

In many ways, the newly "enlightened" and younger Japanese turned their backs on centuries of traditions--likely much to the dismay and hurt of older generations. During this period, the Japanese government played "catch-up" with the west, desiring to become social and political equals with its newly acquired trading partners in the west. With its borders having been breached by foreign powers, Japan's leaders also desired to become militarily powerful, likely mindful of their recent weaknesses. It was therefore a period of much turmoil and very powerful social change.

By the 1890's, multi-colored Japanese "ukiyo-e" prints were already beginning to be viewed as "old-fashioned" and "out of date," as the popularity of Japanese woodblocks had already started to become a dying tradition. Some resurgence of Japanese interest then occurred with the release of "war print" woodblock illustrations that were popular during Japan's 1894-95 war with China, however at the same time, western printing presses and lithography were being introduced into Japan, bring severe economic pressure to those publishers that had previously relied on the expensive and labor-intensive production of hand-printed woodblocks.

With many Japanese artisans (and publishers) likely hurting for employment, "kuchi-e" then largely evolved, in this writer's opinion, simply out of economic necessity. The Japanese have always been shrewd and adaptive as businessmen, and so therein likely lay the seeds of "kuchi-e" production. What better way to continue making a living (and a business) of producing woodblocks than to sell them in conjunction with the popular novels and literary magazines of their time? Even today, the Japanese are well-known for their seemingly insatiable appetite for the written word accompanied visually with drawings--one need only to witness the widespread reading of "manga" (comics) by adults on subway trains to confirm that. Likely much of this appeal is due to the "visual nature" of the written Japanese "kanji" and "hirigana" alphabets, and it seems clearly evident that the same love of reading existed a full century ago. Hence, late-Meiji Japan saw the birth of "kuchi-e" as inserts into the popular novels and magazines of their time.

The first widely seen "kuchi-e" woodblocks were produced as inserts into the popular literary magazine "Bungei Kurabu" during the period 1895 to 1914, although some earlier examples are know to have appeared as early as about 1890. During this nearly 20-year period, this widely sold literary magazine produced literally thousands of these "kuchi-e" woodblock illustrations in the form of over 230 individual designs. A couple of examples are shown illustrated below, showing how their "kuchi-e" woodblocks are folded and attached to fit within these tall/narrow novels.

Fortunately, many of these 100-year-old masterpieces exist today. In fact, many of them are in surprisingly fine condition as a result of their storage inside their protective novels. Represented in "Bungei Kurabu" and other literary magazines of this period were well-known artists such as OGATA Gekko, MIZUNO Toshikata, and KABURAKI Kiyokata--and lesser-known names such as KAJITA Hanko, SUZUKI Kason, and TAKEUCHI Keishu, TOMIOKA Eisen, WATANABE Seitei, and IEKDA Shoen.

The typically encountered "kuchi-e" are remarkable consistent in size, with most measuring about 8 1/2 x 11 3/4 inches (22 x 30 cm) of printed area with another 3/4 inch (2 cm) or so unprinted "tail" which is inserted and sewn into the books binding. Thus, they are quite large, nearly approaching "oban" in size (actually, they approximate "ai-ban" in size, that is, one size below full "oban"). As mentioned above, nearly all then are folded twice--thusly becoming a three-sectioned "fold-out" which the book's reader can then unfold to view.

The amazing thing about many "kuchi-e" woodblocks is the remarkably refined printing that they exhibit. Produced during a time when woodblock printing techniques and skills had become highly advanced, many exhibit advanced printing techniques such as the use of "gauffrage," extensive "bokashi" shading, "burnishing," metallic pigments, and highly detailed carving. In other words, they were not hastily produced. In fact, most were produced to such high standards that it is said that their production accounted to nearly HALF the cost of a Meiji book's production. Yet, despite their added costs, they were widely popular and perhaps this was why--although costly, they're simply beautiful. Below are some examples to demonstrate the skill and care with which they were produced. 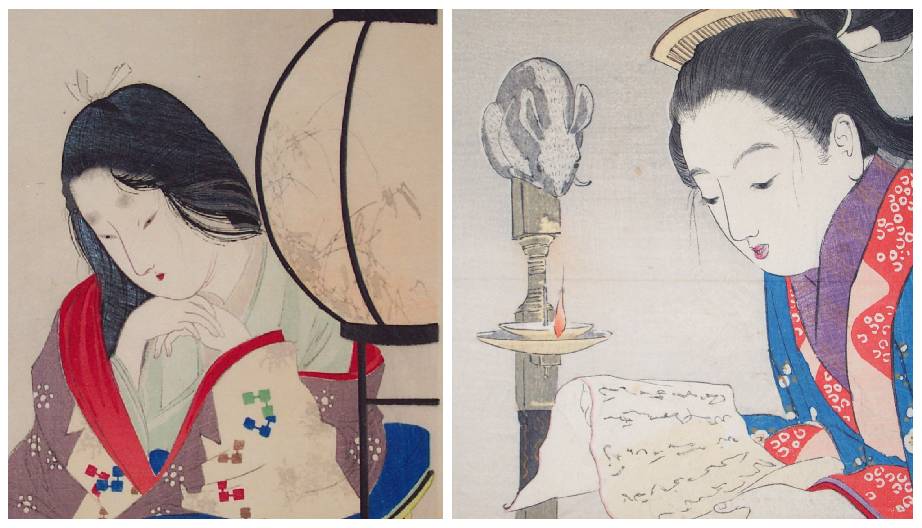 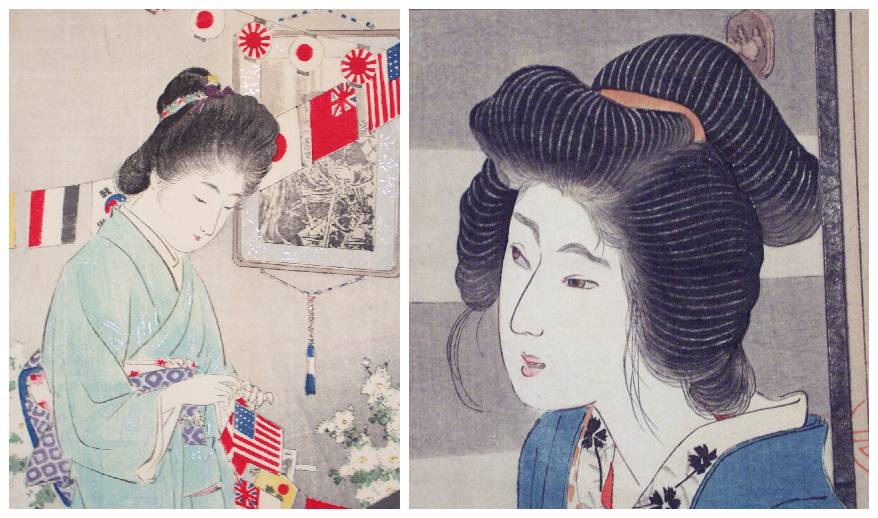 Yet, despite the beauty and refined printing typical of these "kuchi-e" woodblocks, oddly even to this day, this genre of superbly produced 100 year old prints is still largely ignored or certainly remains under-appreciated by a great many collectors of Japanese woodblocks. This lack of recognition will likely soon change however, with the recent release of Helen Merritt's and Nanako Yamada's release of their new and scholarly 2000 book titled "Woodblock Kuchi-e Prints--Reflections of Meiji Culture" and pictured below. It's already become "the standard reference" for "kuchi-e" collectors the world around. 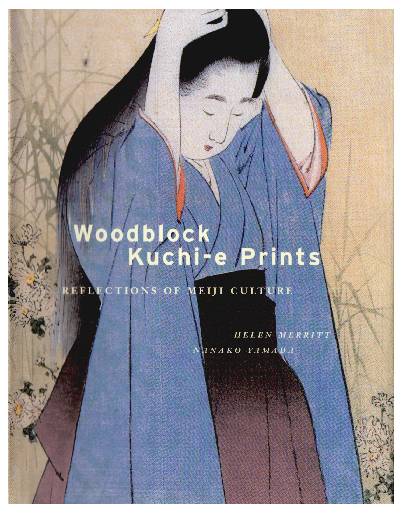 Not all "kuchi-e" are as large as twice-folded style with are typically encountered. Also existing, but much less commonly encountered, are smaller, non-folded "kuchi-e" inserts. These smaller illustrations measure about 5 1/2 x 8 inches (14 x 20 cm) of printed area, again with another 3/4 inch (2 cm) or so unprinted "tail" which is inserted and sewn into the books binding. Certainly no less care and attention to detail was spared in their production, as many examples exhibit very detailed carving and often are "gauffraged" as well. Side-by-side size comparisons are shown below. 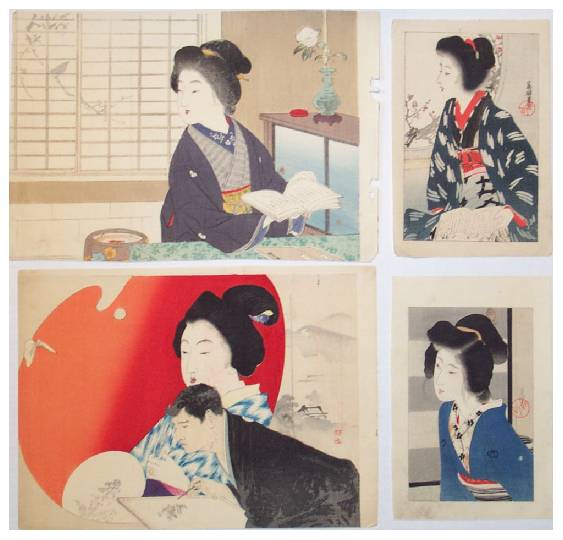 As can be seen when viewing a selection of "kuchi-e" woodblock inserts, oftentimes they deal with the plight and ordeals of Japanese women, since many of these illustrations were used to illustrate romantic novels. There are many such examples, with such "bijin-ga" prints comprising perhaps 50 to 60 percent of all "kuchi-e" produced. Because of their charm and beauty, such images are popular among collectors.


Also commonly thematic of "kuchi-e" were images depicting Japanese customs and rituals, as well as seasonal depictions of which the Japanese seem so fond. No culture in the world, it seems, so worships the changing beauty of the four seasons than the Japanese. The same can be said about Japanese traditions; even though Japan changed dramatically during the Meiji period, strong ties to past customs and seasonal rituals were maintained.


Also seen in "kuchi-e" are varied themes such as the legend of warriors and samurai, "kabuki" theater, and even the Sino-Japanese (1894-95) and Russo-Japanese (1904-05) Wars of the period. The topics depicted in "kuchi-e" were widely varied and often overlapping.


As a result of having often been overlooked by many collectors in the past, the genre of "kuchi-e" still remains today a fertile area for the serious or even casual collector of Japanese woodblock prints. Much like the three-panel "war triptychs" also common to this late-Meiji period, the quality and care with which these "kuchi-e" illustrations were produced is truly outstanding. They were created during a time when printing techniques had become highly advanced, as were the skills of the carvers and printers of this time. Like other areas of woodblock print collecting, these prints deserve the serious attention of woodblock print connoisseurs.

For the moment, many fine examples can still be found today at prices that belie and are not truly representative of their quality. This situation, however, will likely change over the very near term, as a growing awareness and appreciation of these prints is clearly already underway. 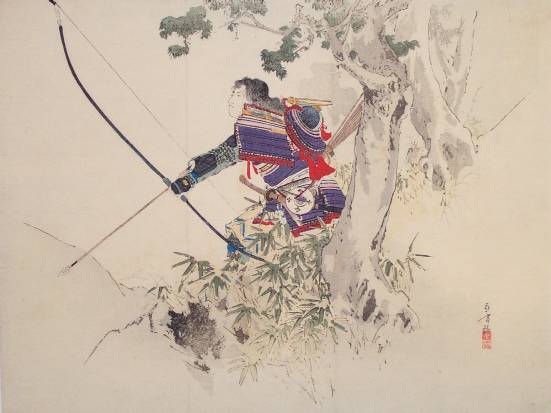